The West Clermont girls tennis team has been preparing for their season since early June when they went through tryouts called open courts. Their actual season did not start until August. The tennis teams include varsity and junior varsity players. There are 12 girls who make up both teams. That is seven on varsity and six on jv. This season, the team won a match against Western Brown 4-1, but it was the only win of the season so far. The tennis season for girls is almost over, but who says they can’t win their last game? Come support and cheer them on against Bethel on the 27th of September here at West Clermont High School! 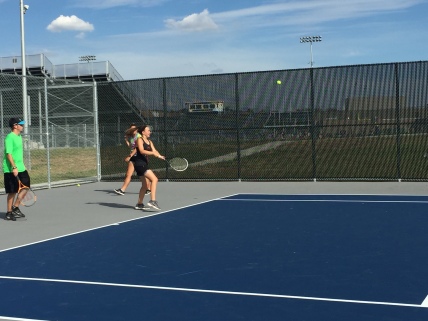 These girls may not be winning every game, but they sure do have a very positive attitude about their team and supporting each other. “Even though we don’t always win, we still have a lot of fun,” said Deborah Ipinmoroti. Taylor Hogshead said that despite their record, they get a pretty good crowd at their matches. Molly Stockton said, “I enjoy the competition of the matches.” It also seems like the girls don’t just get along during playing time, they also are good friends and talk all the time. “The connection with everyone is like we are one big family,” said Hailey Thalheimer.

END_OF_DOCUMENT_TOKEN_TO_BE_REPLACED

The Lady Wolves came out with a victory over Milford! The Lady Wolves were tied for second in the league with Milford until they came out with a win! The Lady Wolves are now 2nd in the league and not sharing. The Wolves came back from being down 0-3 and came up with a win 4-3. With team effort the Wolves deserved the win.      Kaya Vogt ended up with 2 goals last night along with Anna Smith and Megan Dewald with 1 goal. Kendall Simpson got two assists while Kaya and Anna had the others. A beautiful night to add on to another victory for West Clermont making the varsity girl’s soccer a record of 7-3-2.

Imagine being strapped up to a bed against your will, captive in sheds on farmland nearby the India-Nepal border with your blood being drained from your body. You’re too weak to protest or put up a fight and all of this is for the purpose of cash.

Blood farming is a growing health and human rights issue that is very common in India. This practice is highly illegal and revolves around human beings being treated like dairy cattle on an industrial farm. These individuals though however, instead of milk, are drained of their blood cruelly. It is then sold on the black market and is used for a wide range of medical purposes. Blood farming is just one of the variables of the international black market that sells fluids and tissues from the human body. According to a study in 2013, organ trafficking is a big profitable business making between $600 million and $1.2 billion in total annually.

END_OF_DOCUMENT_TOKEN_TO_BE_REPLACED

Molly Stockton, first singles, lost 2-6 on the first set and put up a fight but ended up losing with 5-7. Stockton came from Amelia and played first singles last year as well. She is a senior this year and has been playing all four years of high school.

END_OF_DOCUMENT_TOKEN_TO_BE_REPLACED

The West Clermont lady Wolves pulled out a tough win on Saturday, September 23 beating the Fairfield Indians 2-1 putting them at 6-3-2. As Fairfield is in first place in their league, the Greater Miami Conference, they were expected to beat West Clermont. “It was a very intense game and they outplayed us in the first half but we came out strong in the second half.” stated Kendall Simpson, a defender for the Wolves. Simpson played a prominent role in not letting the opponent score goals.

END_OF_DOCUMENT_TOKEN_TO_BE_REPLACED

As many of us wonder why we dream, there is no set answer. There are many theories to show why we dream, but not one theory has been proven. Today I will present you the theories of END_OF_DOCUMENT_TOKEN_TO_BE_REPLACED

As we go from summer to fall, although we mourn the sunny days off, we do get to look forward to Apple’s tradition of launching their newest products and updates. For years, Apple has made their biggest launches in September, ranging from the newest iPhone to the introduction of the Apple Watch.