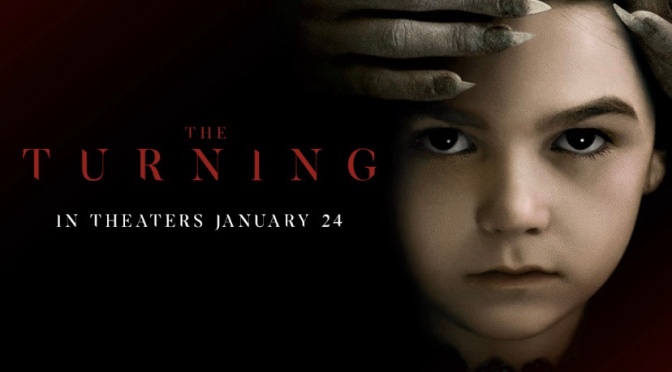 If you are looking for a heart-pounding, palms sweating, spine chilling movie, The Turning is the movie for you. The movie was released January 24, 2020. It’s about a young governess who is hired by a man who has become responsible for his young nephew and niece after the deaths of their parents. If you are a fan of Finn Wolfhard from the netflix series Stranger Things, then I would 10/10 recommend this movie to you.

The movie starts out with a blonde woman getting in her car frantically trying to get away from the house that the children were in. She gets to the gate and is unable to get it open. Something unknown attacks her and she disappears. Then, another young girl named Kate gets the opportunity to teach one of the children that lives in the haunted house named Flora. When watching Kate pull up to the house, you could tell that the house was old and it didn’t look like a normal one that would feel safe. It had that mid 1800’s medieval feel to it. Once she arrived, right off the bat you could tell that the children (Miles and Flora) were not normal as well as their carekeeper Miss Jessel.

The very first night there, Kate wakes up to what sounds like Flora screaming for help so she goes to check it out. She finds out that it’s not and she ends up on the East wing of the house where it’s forbidden to be. There she meets Miles, the other child in the house. The next morning while tutoring Flora, Kate gets a call about Miles being expelled from school because he slammed a kid’s head into the bathroom wall. Things then start to become more interesting when Miles gives Kate mixed emotions about whether or not he likes her. However, more into the movie when Kate takes Flora and Miles out for ice cream something very peculiar happens. While approaching the gate to leave Flora tells Kate to stop the car because if she leaves then she dies. Kate ignores her and continues to drive until Miles yells at her to stop. Kate then stops and tries to get out of the car to apologize to Flora but Miles approaches her and tells her that she should’ve stopped and he knows her worst fears.

You can guess what might happen to Kate after Miles’ and her altercation. At night she begins having nightmares about her worst fears. One being her being drowned in a bathtub by Miles. She then thinks she’s awake but is actually having another hnightmare. This one is where she finds out what happened to the blonde woman that was there before her. The woman was strangled by Quinn who was the ghost at the house. The movie then goes on with Kate discovering who the children really are and what actually happened to everyone that perished in the house.

Overall it was a great movie. However, I feel like it needed to be longer because the ending leaves you with a cliffhanger and a lot of confusion.