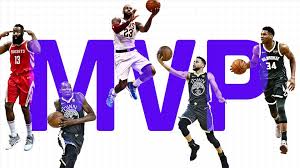 The 2018-19 NBA season has been amazing so far. From amazing records broken to stars rising up and showing what hey have in them. The MVP race has been a tossup for most of the season, but as were entering into the finals stages of the regular season, few candidates are still in the mix. From spectacular dunks and performances to record breaking streaks, here are the list of the top 5 candidates for the 2018-19 NBA MVP trophy.

Giannis has been outstanding this year, carrying the Bucks to the best record in the league. Not just the conference, the whole league. The “Greek Freak” has been unstoppable in the paint and has even managed to hit a few jump shots this season. Giannis is averaging 26.6 PPG, 12.6 RPG, and 6 assists per game. This new face for the NBA has had a huge impact on the league and teams around him. The Bucks were a mediocre team just a few seasons ago and now there a legit finals contender. They have surprised everyone in the east by surpassing the 76ers and the Celtics in the conference. Giannis is surrounded by shooters on his line-up which gives him wide open driving lanes to do whatever he wants against the opposing team. This makes him virtually unstoppable with his size and speed. It’s going to be hard for any other star to pass him up on the MVP status.

Harden has also been an outstanding player this season. No matter what the defender does, they can not stop Harden from scoring the ball. Harden is leading the league in PPG with 33.7 and is only fourth in the NBA in assists with 8.7PG. Harden has been deadly with his signature step-back three. His three pointers have been amazing, averaging 14.4 three pointers per game this season. Harden has broken the record for the most continuous 30 point games. Harden’s 30 point streak has just ended with 32 games in a row. That is a record that will most likely never be broken. “The Beard” has shown and given it his all this season and is another top pick for the 2018-19 NBA MVP trophy.

Kawhi has been Kawhi this year. After getting traded to the Toronto Raptors, Kawhi was not happy. Even though his move to a completely different team was hard for him, it did not effect his game. Kawhi is averaging 27.3 PPG and 7.9 RPG. Kawhi has put the Raptors in the perfect position to knock off Golden State in the playoffs this year. Even though Toronto has a team driven play style and still Kawhi is averaging those points. Kawhi is also a lockdown defender averaging almost 2 SPG. His defense is a huge factor in his position in the MVP race. As the season finishes out and the playoffs are in sight, we might see Kawhi step up his game even further and become an elite candidate for MVP.

LeBron has been struggling this season compared to the past. The past few season were arguably the best of his career. Carrying the worst team in the NBA to the finals multiple years in a row. Now that he switched to the Lakers and doesn’t have to carry all his teammates on his back, he can take it easier and prolong his retirement by years. Still with LeBron not going as hard as he can right now he is still in the race for MVP averaging 27.3 PPG, 8.3 RPG, and 7.1 APG. LeBron has and will always will be an MVP candidate. He has the highest basketball IQ of any who has played the game before him. He also has powerful trade influence among players throughout the league. “The King” is without a doubt the most valuable player to have on your  team.

Westbrook is number five one this list. He has been playing out of his mind this year averaging 22.5 PPG, 11 ASP, and 11.3 RPG. Hes is averaging a triple-double and currently holds the record for the most consecutive triple-double games in a row at 4. Russell Westbrook would be higher up on this list. If he didn’t have other stars on his team like Adams and George, he might be able to show off his skills. Even so, Westbrook has put on a great performance this year and hopefully many more years to come. Can’t wait to see what Westbrook does in the playoffs this year.