The notorious drug lord El Chapo was convicted February 12th of drug trafficking charges in New York. Even though he is now incarcerated the drug cartel doesn’t seem weakened at all and they have continued the shipments of drugs that was detected on the boarder of the past few weeks. The cartel is still in control of a worldwide web of contacts that will move Colombian cocaine. They also get chemicals and drugs shipped in to them from around the globe. And have smuggled tons of marijuana and cocaine through engineered multi-million dollar tunnels. They pay ‘mules’ to ferry shipment in cars and trucks. But this doesn’t even include the armies of hit men who are involved in extortion and kidnapping.

With El Chapo gone, a man that goes by El Mayo that has been involved with the running of the cartel since it was founded over 3 decades ago is considered the main player at the table. Along side with El Chapos sons, who go by “Little Chapos”. They take care of the small street gang drug dealers and El Mayo deals with the big deals.

El Chapo is expected to spend decades behind bars as of Tuesday. He is notorious for pulling off escapes from maximum security prisons. He is perhaps only rivaled by the late drug lord Pablo Escobar. Or Zambada who has proven to be more elusive simply by staying in his rural strong hold where the cartel is out of sight. It’s is said that if Chapo would’ve just done what Zambada had and stayed up in the mountains, he’d still be a free man today. 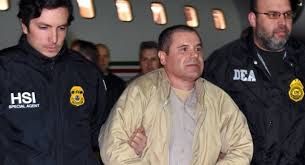 During Chapo’s absence the cartel has has developed a high profit in fentanyl. It can be bought for up to $9,000 kilos is China. It is cute to percent purity and pressed into ‘prescription’ drugs. And then marketed in the US for nearly pure profit. But the cartel is not good at mixing and measuring because their mixtures of fentanyl can range from almost none to a high lethal dosage. Other words they are literally killing there customers.

Hopefully having El Chapo incarcerated will help make it easier bring an end to the cartel and maybe even find out unknown information through the drug lord. But it is going to take a lot of time to put a complete stop to the cartel. But taking El Chapo out of the picture is a great start.