The Met Gala is an annual fundraising ball to raise money for the Metropolitan Museum of Art’s Costume Institute in New York City. Each years event has a primary theme based on the exhibition that is used to inspire the #MetMonday fashion. Here are 10 of the most talked about looks inspired by the nights theme, Heavenly Bodies: Fashion and the Catholic Imagination.

The Gossip Girl actress attended the Met Ball wearing a custom Versace gown featuring a jeweled bodice as well as a full skirt. She accessorized with her custom-made halo crown made with over 100 carats of nude champagne diamonds, as well as over $2 million worth of Lorraine-Schwartz jewelry.

Gracing the carpet with her fiance Offset, Cardi B wore a Moschino by Jeremy Scott gown. The form fitting dress featuring a slit showed off her newest curves thanks to her pregnancy. She embodied the theme of this years Met with her crystallized headpiece as well as the intricate designs throughout the entire look.

Channeling somewhat of a nativity scene, Jared Leto, Lana Del Rey, and designer Alessandro Michele were dressed head to toe in Gucci for last nights event. Leto and Del Rey wore similar ensembles featuring gold and blue accents, but Lana’s crown and chest piece were the most talked about part of the ensemble. Some say that the trio perfectly embodied the theme, while others think it may be too much. 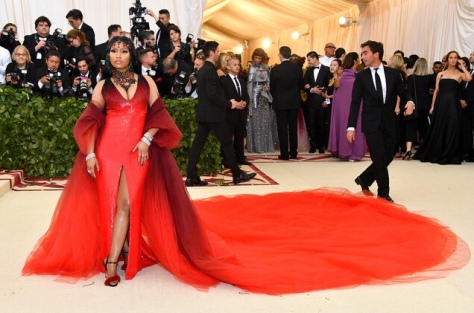 Arriving to the Met in a bright red Oscar de la Renta gown, Nicki Minaj revealed that she was inspired to choose her seductive dress and jeweled headpiece because she wanted to represent the more sinful side of this year’s catholic theme. The female rapper also shared information regarding her new music, hinting at a new album coming soon.

Debatably the top supermodel in the world, Gigi appeared at the ball wearing a sheer white, blue and gold bead-embellished Versace dress. The dress was said to resemble butterfly wings or stain glass windows. The model surprised many in her choice of designer as she has previously wore Tommy Hilfiger to this annual event and she has created multiple collections with the brand. But a note from Donatella Versace to Hadid posted on her Instagram story expressed their mutual excitement for last night’s carpet look. 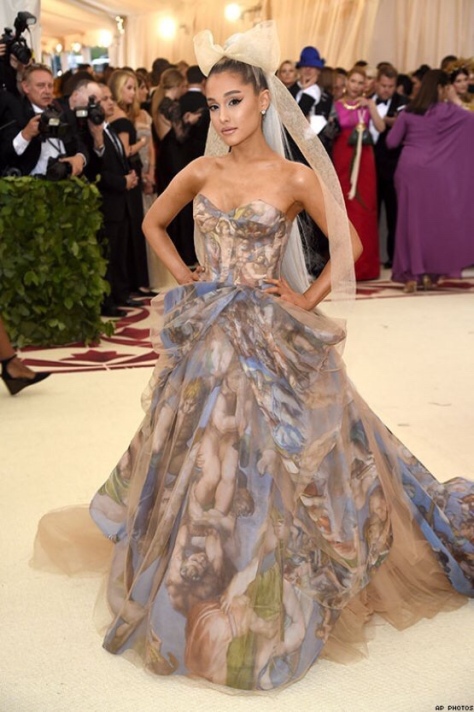 Embodying an angel, Grande wowed on the Met carpet in her custom made Vera Wang gown. The singer posted a picture of Michelangelo’s ‘The Last Judgment’ on the day of the ball, hinting at what was to come from her ensemble. Her dress featured the famous and intricate painting that is displayed on the wall of the Sistine Chapel, perfectly matching the catholic theme of the night. 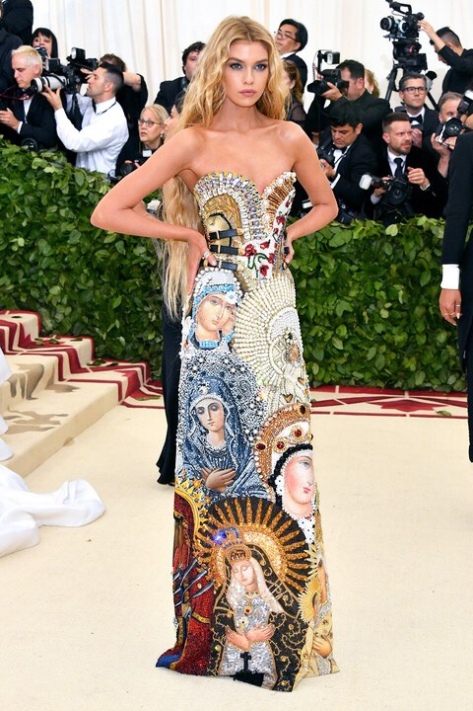 The Victoria’s Secret Angel dressed to the gala’s theme by wearing a long column Moschino gown that featured encrusted images of Madonna. Stella accented her look with simple David Yurman jewelry and adding extensions to elongate her golden locks to an unrealistic length,

The King of Wakanda impressed on the carpet as he wore a unique Versace suit. The Black Panther star kept his wardrobe close to the theme of the night by decorating his three piece suit with ornate golden crosses. Boseman finished off his look with an ivory cape and gold shoes.

The Queen of the Dragons arrived to the Met Gala wearing a Dolce and Gabbana Alta Moda gown. The black and gold dress featured intricate patterns and a statement picture in the middle. Her platinum hair was pulled into an updo with a golden crown. Emilia paired her look look with a red lip and bright pink blush.

Known as the Queen of the Met Gala, Rihanna channeled a Pope-like look to the Catholic themed event. Acting as a co-chair of the art fundraiser, the singer arrived wearing a pearl and crystal-embellished Maison Margiela gown. She accessorized the elaborate outfit with a matching jacket and mitre style hat.