After the traumatizing mass shooting at Marjory Stoneman Douglas High School in Florida there has been an uprising in students nationwide to stand up against the United States current gun laws. With 17 left dead there has been a realization amongst more than in the past, and the student survivors plan to take it to those in charge to make a change to better prevent and protect themselves and others in the future, 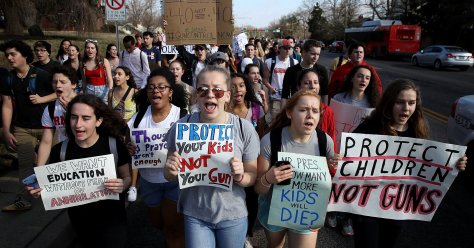 Students across the nation are calling for a walkout during school as way to draw attention to the issue at hand, but those from the Florida school are tackling it head on by marching in the state capital to pressure lawmakers to finally take action on gun control. After their march they are expected to meet with legislators. Just hours before congress rejected a ban on assault rifles like those used to murder 17 and terrify millions, 100 students arrived in Tallahassee prepared to put up a fight. This is the first youth led protest since the shooting, and across Florida on Wednesday students walked out of their classroom to stand with those lives lost.

President Trump is hosting a listening session for teachers and students to open up about how gun control affect their lives and the lives around them. The National Rifle Association will be apart of the town hall meeting broad casted on CNN

#NeverAgain is a movement started to bring awareness to the dangers of the lack of gun control in the U.S.. University students were among the crowd, holding signs and chanting “Protect kids, not guns”.

A seventeen year old survivor named Florence Yared stated “Today instead of returning to our studies, instead of preparing for exams and instead of grieving for dead classmates and teachers, we are out here advocating for a change,”. CNN has been broadcasting debates between the National Rifle Association, as well as Anti-Gun & Pro-gun protesters.

More than ever this particular event has sparked massive amounts of attention and possible action of those in charge. Spokesperson for the NRA, Dana Loesch says that it is not the NRA’s fault, but the states and federal governments for not turning in the results of scans on those mentally unstable, under 38 percent of states turn on 70 percent of their results on those who should not be able to gain ownership of weapons, making its impossible for the NRA to stop them.The rebuttal many provide is that no one should need assault rifles, but they are just told they are need for protection in a potential situation.

Within congress Democrats and Republican bar each other, making it difficult for any decisions to be passed.