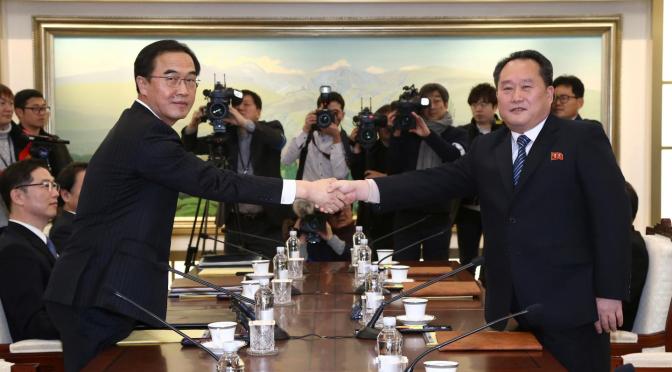 Officials and delegates from both South and North Korea decided to ‘break the ice’ in order to discuss the participation of the totalitarian regime in the 2018 Winter Olympics. This is the first high-level meet between both nations in the first time in over two years. The talks took place at the three-story Peace House, located in the South Korean border village of Panmunjom. The small town is technically a part of the demilitarized zone (DMZ).

During his New Year’s address, supreme leader Kim Jong-un announced his interests in convening so that his people may participate in the Olympic games. President of South Korea Moon Jae-in has heard Jong-un’s message, and has sent invitations welcoming the leader for face-to-face meetings. President Moon holds firm beliefs that the sporting event (alongside other Olympic affairs) may serve to re-establish connections/dialogues with the communist nation towards the north.

The delegation of South Korea, headed by Cho Myoung-gyon, hosted the monumental convention over the theme of NK Olympic involvement. Myoung-gyon proposed that athletic representatives of both Koreas march together at the opening & closing ceremonies of the winter games. He is looking to push an agenda which would go beyond simple Olympic participation. The SK unification minister also presented the idea of holding a Red Cross meet in order to discuss military talks and civil balancing such as family reunifications. So far his proposals have yet to be agreed upon.

The other party at the discussion was led by Ri Son-gwon. The Chairman of North Korea’s Committee for the Peaceful Reunification of the Fatherland, while quiet on some answers, did agree to some things (on topic of the Winter Olympics). 30 taekwondo athletes, 140 orchestral musicians, 230 cheerleaders and more have been confirmed to represent the regime if the plans actually come to life. On top of this, the North has agreed to send a smaller-partied group of athletes to the Paralympics in March.

The 230 North Korean cheerleaders, deemed by South Korean media as the “Army of Beauties” have been confirmed to cheer on their people, promises Pyongyang officials. The cheer team is made up of Northern young women and teenage girls, and has become a huge hit in the South. In the 2014 Asian Games, the ‘Army of Beauties’ were set to perform, however they were blocked by NK officials. The last time that the North Korean squad took part in a sporting event in SK was in 2005. That roster included Ri Sol Ju, who has since married (and allegedly gave birth to a daughter of) Kim Jong-un.

These proposals and agreements face a series of potential problems. First off, North Korea has missed registration deadlines and failed to qualify for the sporting event. Because of this, the International Olympic Committee (IOC) must approve the agreement. The IOC meet will occur in Lausanne, Switzerland on this upcoming Saturday. Another issue that has arisen is that South Korea must find a way to compensate (and host) NK delegation without violating UN security Council sanctions. Sanctions include the ban of transferring cash to Pyongyang and the blacklisting of many Northern officials.