One of Pittsburgh’s biggest weapons, Antonio Brown, is sidelined until at least the post season.

Steelers’ star wide receiver suffered a partially torn calf muscle in 27-24 loss to the New England Patriots. The injury will not require surgery and the Steelers hope that the injury will be healed in time for the playoffs. Brown suffered the injury early in the second quarter after catching two passes for 24 yards.

He will finish the season with 101 catches for 1,533 yards and nine touchdowns. Head coach Mike Tomlin said after the game “It changes, A.B. is significant. But I thought the guys did a nice job adjusting and making plays largely. You lose someone like A.B. and there’s adjustment.” 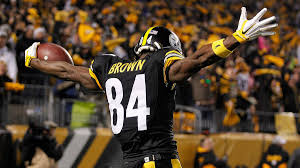 Now with Brown out, Bryant, Smith-Schuster, and Rogers will have to step up and do the impossible, fill the void left by Brown.