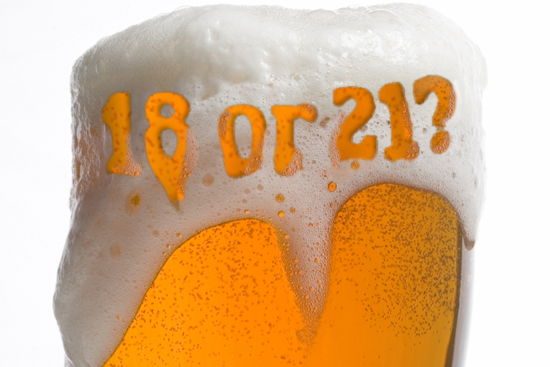 Picture yourself at a party and you’re celebrating, drinking, having fun, doing what most people but you not old enough to have a drink of alcohol even though your 18 and you think your responsible enough to control yourself. Bummer, right?

During a recent Twitter poll 77% of people think the legal drinking age should be 18 and 23% of people think it should stay 21. On this poll it was mostly teenagers who voted, so they more than likely voted for 18 but maybe being 18 and allowed to drink alcohol isn’t a bad thing.

Obviously being 18 and drunk has consequences but so does being 21. Some pros of the legal drinking age being 18 are: allowing 18 – 20 y/o to drink alcohol in regulated environments with supervision would decrease unsafe drinking activity, lowering the MLDA from 21 to 18 would diminish the thrill of breaking the law to get drunk, more teens will be drawn out of private places like fraternity houses and  dorm rooms to more public places like bars where they can be monitored. Also 18 is the age of adulthood ( in the United States at least) and adults should have the right to make their own decisions about alcohol consumption.

On the other hand there are some cons to being 18 and allowed to drink. For example: it would be medically irresponsible; alcohol assumption can interfere with the development of young adults brains.already people under 21 have an easy access to alcohol so lowering it to 18 would cause middle schoolers to have an easy access. Allowing 18-20 y/o to legally go buy alcohol would only increase the number of people in alcohol related crashes.