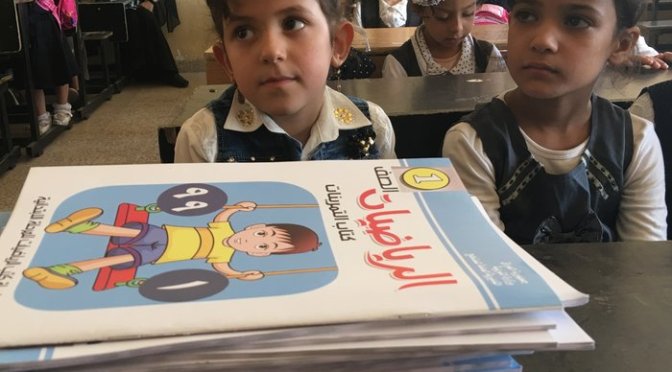 Iraqi students who were deprived of education due to ISIS seizing the northern city of Mosul are starting the school year once again.

For almost three years the city of Mosul, alongside a large span of Iraq, was forcefully occupied by the Islamic State of Iraq and the Levant. ISIL brutally controlled their newly gained territory and were holding onto it with all of their might. Due to this, Mosul was only liberated just earlier this year by American-backed Iraqi troops in a gruesome battle that lasted over nine months.

During the time of their control, the Islamic State ruled with their harsh ways and notorious behavior. Militants forced government hired teachers and staff away and ran schools how they saw fit. Education was corrupt and vilified, leaving a militaristic twist over everyday school activities. ISIL replaced common core classes and instead focused heavily on study of religion and weapons training. Even elementary level math classes were influenced by their propaganda, where children would count images of bullets as practice.

But, luckily that’s now just a haunting memory and no longer a way of life. As I’ve said, the city was liberated earlier this year, July 10th to be exact. But now after a hiatus of over two years children are beginning to once again incorporate schooling into their schedules. Even though Mosul has been free for months, the school year has just begun. However, due to the devastation the war has caused, many schools were heavily damaged or destroyed. Many of the facilities don’t have running water or janitorial staff. Still, the children begin to find their classes as they pass by fractured walls stained with scorch marks and graffiti.

Even in many of surrounding towns which faced little damage, there are delays and problems arising with the new school year. The most prominent of which being how to deal with the lost years. Well, the Iraqi government has implemented a system where children may begin to take makeup classes and sit for exams. If the student passes all of their exams, they may then join the grade they would have been in if school wasn’t interrupted. So many children were affected by the shortage of classes that middle school and high school students are still sitting for exams while the elementary schools reopened towards the beginning of October. Another problem that thousands of families face is enrollment. Many of the people who have fled the city and recently returned are lacking birth certificates and other official documents needed in order to register.

Though many hardships have started come to light, this doesn’t stop the community’s positive outlook. Art teacher Ahmed Abdul Aziz al-Jabouri proudly claimed “This is our library.” while showcasing an old bookshelf that featured a few dozen children’s books. He continued, saying “In the future, we are going to ask students’ families to bring books so this small library will grow.” Another favor that the children and their families have been tasked with is to bring in a flower. Their goal is to revitalize the dirt yard near the school’s entrance. Homemade benches and decorative clay pots are soon to be accompanied by a flower garden bursting with life. Al-Jabouri concludes his interview with the goal of the faculty: “Three years out of school is a long time, so it has affected their minds with all the pressure and the bad treatment. We want to free the children’s minds from all those bad thoughts.”

Officials of the Nineveh school district did not give approval to be quoted, but off record one head allegedly stated “We are beginning from zero. We don’t have books, we don’t have pencils, we don’t have anything.” Still, the shortages of supplies have been no secret to begin with. Many teachers and other workers of the schools have been donating all they can in order to provide the best possible environment for the children. Fortunately, different charitable organizations have caught wind of the student’s hardships, and relief has already started. Nonprofit groups like Libraries Without Borders are collecting books in order to provide aid. Popular Iraqi blog Mosul-Eye is also rehabilitating libraries with a collection campaign, and adopted the slogan of “Let it Be a Book, Rising from the Ashes.”