It was a sad weekend for both the West Clermont football team, and their fans. After losing Friday night to the Anderson Redskins, 34-42, the Junior Varsity team played Saturday morning and were not able to pull out a win either, losing just 30-48. West Clermont was tied for first place with Anderson and winning the game would’ve knocked the Redskins down to second place. The Wolves were down 27-6 at halftime, but fans never lost hope. “I thought we didn’t give our best in the first half and there needed to be adjustments. They came out at half like a new team and played much better overall. You could see the excitement in everyone when we made a comeback. We had their backs the entire game. We never gave up on our boys” states West Clermont fan, Jules Miller.

Ryan Cann, a running back for the Wolves, had two touchdowns, 254 rushing yards and averaged 10.2 yards per carry against the undefeated Redskins, as just a junior. Having to adjust to a whole new position in place of an injured running back, Austin Mayham, Cann played a prominent role for the Wolves offense. Ryan is up for player of the week from the Clermont Sun Sports, taking the lead by 42%. Austin Price, a corner for the Wolves, scored a 79 yard touchdown on a punt return. West Clermont was not expected to win, but no loss is easy. This defeat dropped the Wolves record to 4-3.

West Clermont takes on the Loveland Tigers on Friday, October 13 at West Clermont High School. The Wolves have their sights set on raising their record this weekend. They are looking to defend their den and bring home a win after a tough loss against Anderson. 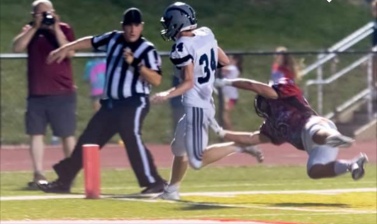