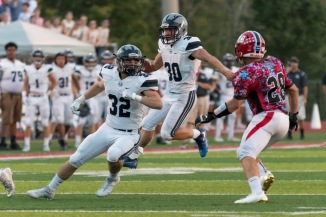 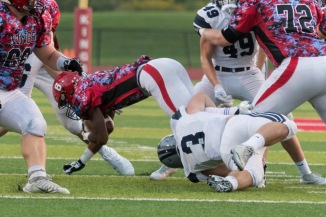 On Friday, Sept. 22, the Wolves were triumphant in a close 21-17 game. The Knights were down 14-3 at halftime. That wasn’t the case for the rest of the game as the knights pulled ahead with two unanswered touchdowns to make it 17-14. With only about 1:30 left in the game, the Wolves scored a touchdown and made an extra point to give them the 21-17 lead. West Clermont held Kings from scoring so the game ended with the Wolves on top.

With the score 0-0 closing in on the end of the first quarter, Wolves, Jacob Kilgore runs the ball for 1 yd. up the middle for the score. With kicker, Cameron Null’s made extra point the Wolves went up 7-0.

6:20 left to go in the second quarter, Knights kicker, Logan Schmidt made a 20 yd. Field goal. Bringing the score to Wolves 7, Knights 3.

The Knights got the ball first coming out of the half. And they came out with a bang. Kings brought the ball out to the 31 yd. line on the kickoff setting up pretty decent field position. Not like it was needed because Kings’ running back Nak’emon Williams ran the ball 69 yd. For the score. With Logan Schmidt’s extra point, Kings was only down 14-10.

With 5:08 left in the third quarter, QB Ashton Koller threw the ball 6 yd. For the score to WR Hunter Jessee. With two unanswered touchdowns, the Knights pulled ahead 17-14.

For the rest of the game up until about 2 minutes left in the fourth quarter, it was just about a stalemate. With 1:28 left in the game, West Clermont’s QB, Tyler Steinker threw a pass to WR Hunter Eads for a 15 yd. TD. 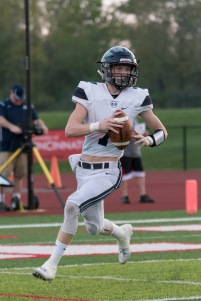 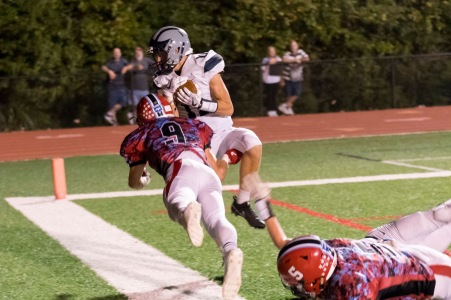 But the Knights didn’t give up just yet. RB Nak’emon WIlliams ran the ball for 50+ yards to set up Kings in great field position. With less than a minute left in the game, down 21-17, Kings had 4 shots to score. With great defense from Wolves’ Matt Lewis and Lorenzo Jones, West Clermont was able to hold off the Knights for a big league win. 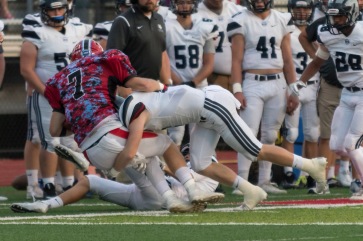