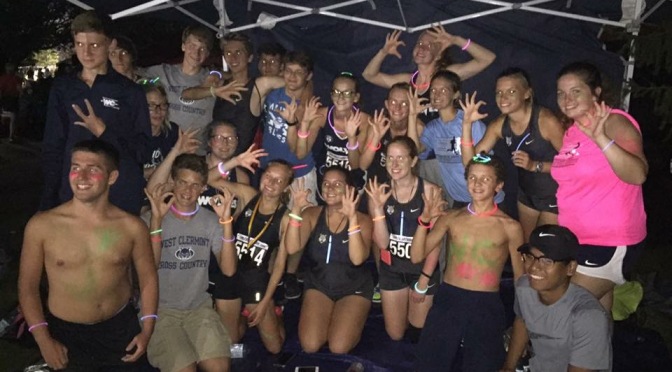 Cross country is a sport that requires dedication and the will to want to run everyday. Though training can be rough the reward often makes up for it. Cross Country is a sport focusing on self improvement. The West Clermont Wolves showed great improvement this week with 17 personal records at Centerville High School. Centerville High Schools meet called “Saturday Night Lights” took place around the time of sunset and into the dusk. This meet accommodated about 250 teams.

The Lady Wolves dominated their previous times this weekend. Maddie Walker led the pack for the girls, running a 17:49. This was her second best time in her career and helped her place 4th in the championship race. Not far behind was her friend and teammate Morgan Walsh running an 18:49 and placing 25th in the Championship Race. Maddie Walker and Morgan Walsh 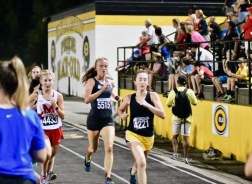 along with teammate Emily Lagana are the girls team captains and not only set great examples with their hard work and dedication but also show great leadership to the team.

Also, on the varsity team Morgan Schafer had a new personal record of 23:28, Chloe Lehn not far behind with a new best of 23:30, Brooke Hall ran a personal record of 23:32. Schafer, Lehn, and Hall have been battling really close this season. Hall says “ the key to her success is using her teammates to push her.” Colleen, a freshman ran her first ever varsity race this past weekend and also ran a new best of 25:04. Girls varsity placed 26th out of 33 teams.

Leading the Jv team was Kim Lacey with an amazing personal record of 26:55, before this past race she ran a 29:21. This huge leap helped Kim earn runner of the week for the West Clermont girls. The rest of Jv followed Lacey and ran their hearts out. This was definitely a meet to remember for the Lady Wolves.

Much like the girls team the boys also dominated their personal records. Leading the boys team is freshman, Davis Lagana. Davis has been running for awhile now and enjoys pushing himself and his team to do the best he can. Davis has big things coming for him as his highschool years have just begun. Behind him is senior Jesse Bingamon with a new record of 18:30. This is Bingamon’s first year running and he intends to make the most of it in his last year of high school. Behind Jesse is runner Ethan Chaney with his personal record of 19:01. Chaney is new to the district and has brought a lot of potential. Freshman Kory Kaiser and sophomore Myko Lomeda have both been working hard and have became a huge asset to the boys varsity team as they are both first year high school runners. Varsity boys placed 19th out of 29 teams this past weekend.

The Jv boys were led by Wade Broughton and Michael Sperl. Both Broughton and Sperl have been working extremely hard at practice and are looking to run varsity in the future. The other boys running Jv really have put their heart and soul into running and their times are showing it.